Our bodies tick to two clocks. One clock is ruled by the Sun, and generally known as the Circadian Rhythm. The other clock, regulated by a gaggle of nerve cells in the brain called the suprachiasmatic nucleus (SCN), is called the Sleep/Wake Homeostat.

Time to Go to Sleep

When we’ve been awake for a long period of time, Sleep/Wake Homeostasis tells us that a “need for sleep” is accumulating and we’d better get some shut-eye. This regulatory apparatus also helps us maintain enough sleep throughout the night to compensate for the number of hours we were awake.

If Sleep/Wake Homeostasis were our only clock, we would awake from a sound sleep fully rested, restored and alert, but as the day progressed, we would get more and more fatigued, like a battery steadily running out of power. However, as you know, that’s not what happens. Energy-wise, we experience ups-and-downs throughout the day, and this is due to the counter-acting force of our other clock, the one commonly referred to as the Circadian Rhythm. 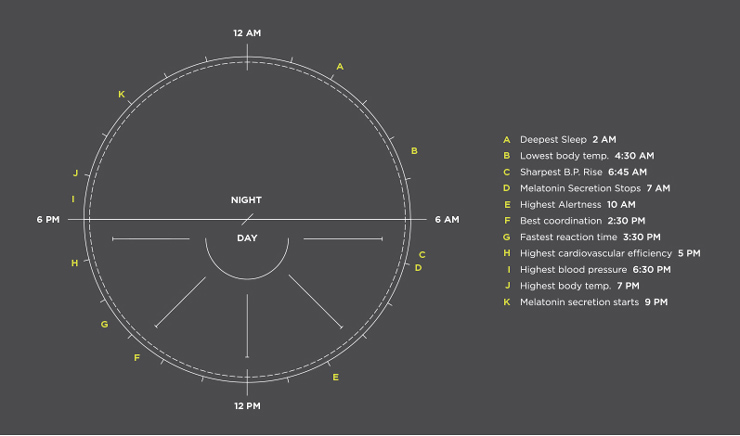 As Old as the Sun

The Circadian Rhythm is a 24-hour cycle that effects organisms as varied as humans, fruit flies and fungi. The Circadian Rhythm dips and rises at different times of the day. For adult humans, the strongest sleep drive generally occurs between 2-4AM, and in the afternoon between 1-3PM, although this varies depending on whether you’re an “early bird” or a “night owl.” The sleepiness we experience during these Circadian dips will be less intense if we’ve had sufficient sleep, and more intense if we’re sleep deprived. The Circadian Rhythm also causes us to feel more alert at certain points of the day, even if we have been awake for hours and our Sleep/Wake Homeostasis is signaling us to be sleepy.

Battle of the Clocks

These two systems usually counterbalance each other. However, because they operate independently, they can become misaligned. Circadian disruptionssuch as jet lag put us in conflict with our natural sleep patterns, since the shift in time and light cues on the brain forces the body to alter its normal pattern to adjust. But these symptoms can also occur in everyday life, when the Circadian Rhythm is disrupted by keeping long or irregular hours. That’s why it’s important to keep a regular sleep schedule — so our two clocks will beat as one.

The Light and the Mind

The Sleep/Wake Homeostasis (SNC) is also influenced by light and darkness. The SCN is located just above the optic nerves. In the morning, light travels from the optic nerves to the SCN, signaling the internal clock that it is time to be awake. The SCN signals to other parts of the brain that control hormones, body temperature and other functions that play a role in making us feel sleepy or awake. When there is less light, like after sunset, the SCN directs the brain to produce more melatonin, a hormone that makes you sleepy. This why reading from a Kindle, iPad or tablet in bed at night can generate wakefulness, while reading a paper-based book generally allows fatigue to set in more quickly.

Deep sleep is our goal

Sleep better in a DUX bed

Back pain relief with The DUX Bed

Back pain relief with the DUX bed